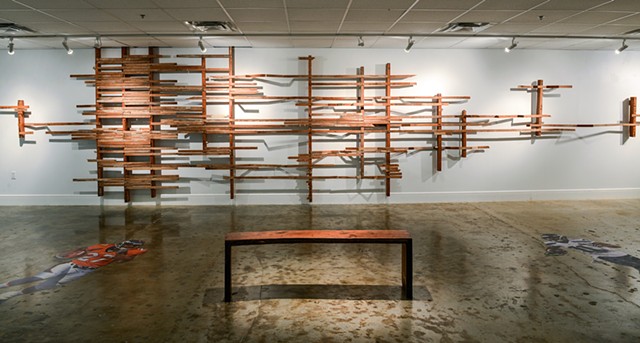 I work mostly in wood and paper: sculpture, furniture, and printmaking. Working with tools helps me approach a sense of peace; the materials and process follow a rejuvenating logic and humbling risk. Over 20 years of work experience in the construction trades largely informs this work. Conceptual points of focus include the interconnectedness of the natural and built environments, as well as blurring the divisions between utilitarian, aesthetic, and spiritual function. Through their integration I feel closer to whole, and somehow more hopeful. A chair can be as useful for rumination and the fight for social justice as it is for sitting. Much of my work incorporates old growth Dade County pine (pinus elliottii var. densa) wood, a rare local South Florida tree which was logged nearly to extinction by early 20th century development; the material I use has been salvaged from my own 1926 Miami home and many other, often demolished, Miami buildings. This material, a symbol of fraught industrialism and ecological mortality, signifies the perennial boom of developers and tourists seeking fortune and paradise in this land of tropical paradox. My printmaking background has led to an ongoing series of in situ embossed prints, often of cracked or degrading street surfaces in culturally or environmentally sensitive areas. The impressions describe a place as it is in that moment, yet also transform it. Usually overlooked, these features are recorded as aesthetic objects- themselves fragile bas relief sculptures documenting a place susceptible to the collective whims of mankind and an indifferent Nature with ever rising tides. Employing these materials, and their history, is an attempt to document the present, as well as interconnect the utilitarian and the transcendental. In effect, the source material takes on a new role as a monument, the process a ritual; together they become a meditation as well as harbinger of the Anthropocene.

Nick Gilmore (b. 1978, Alabama) is a Miami-based sculptor and printmaker. He received his BA in Studio Art from Spring Hill College (1999) and his MFA from Florida International University (2014). From a young age he was drawn to the natural world and originally planned to study zoology; later he worked extensively in the construction trades. These two trajectories factor heavily into his artwork, which often focuses on the interconnectedness, as well as the disconnectedness, of the natural and built environments. He was awarded Locust Projects' LAB/MFA program in 2013 and was selected as an AIRIE (Artist In Residence In the Everglades) Fellow in July 2017. Since 2015 he has served as Adjunct Professor of Printmaking at Florida International University. He has exhibited throughout South Florida and elsewhere, including at Bernice Steinbaum Gallery, Locust Projects, Dimensions Variable, Turn-Based Press, Swampspace, 6th Street Container, Patricia and Phillip Frost Art Museum, among others.